If reviews (or whatever) aren’t your cup of tea scroll down to the next item, Three hundred and thirteen, a short thing on process.

And if that doesn’t interest you, go for a walk and think about it . . .

Three new exhibitions opened last week at the Canadian Photography Institute, at the National Gallery of Canada. I had a close look at two of them: Gold and Silver: Images and Illusions of the Gold Rush and Frontera: Views of the U.S.-Mexico Border.

Gold Rush shows us historical photographs (and illustrations and adverts) shot during the gold rush that happened in the last part of the 19th Century. Frontera shows us contemporary views of the U.S.-Mexican border.

The gems, in the sparkly sense of the word, in Gold and Silver are the daguerrotypes. Presented in a darkened room and lit to accentuate their otherness . . . drama upon drama. 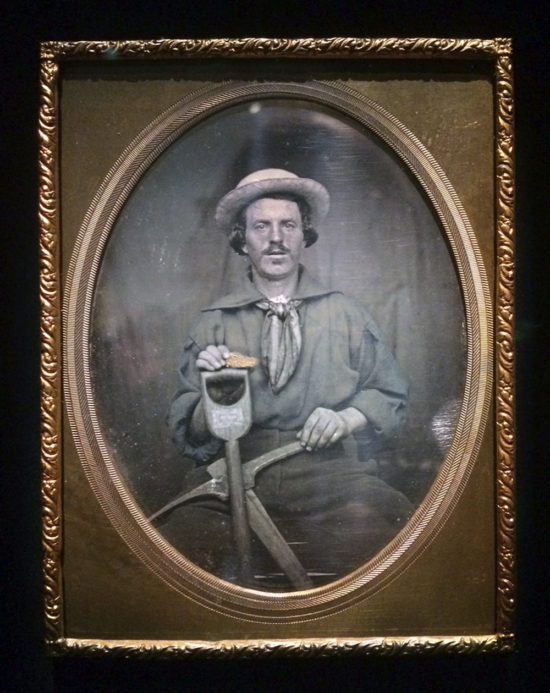 The following room has a whole bunch of images showing landscapes and portraits (and adverts) from the Klondike, Alaska and other sites of the migration that was spurred by the gold rush of the second half of the 1880’s. Less spectacular than the daguerrotypes and because of that, more telling. If only a tighter edit had been applied.

According to the gallery’s messaging Gold and Silver and Frontera, while being about “borders, territory and migration”, also serve to bring forward the technical and social evolution that happened in photography.
Judging from the images in Frontera you’d think that the only real evolution in photography was the advent of colour, the disappearance of people and the invention of the drone.

From Geoffery James’ beautiful ground-level views of one of the earliest bits of the border fence (1997), to Pablo Lopez Luz’ trenchant aerial photos of the border, from Daniel Schwarz’ accordion books of stitched satellite images that show the entire border, to Adrien Missika’s typology of cacti (plus a video, shot from a drone), we see the border abstracted. It rests with Mark Ruwedel and Alejandro Cartagena to bring a human/political perspective to the show. These two photographers are represented here by a total of 4 images.

Ruwedel shows us the remnants of passage, debris left behind by migrants making their way to the promised land. We can only imagine what came before and after. Cartagena’s large image of  the fence with a silhouette, really just a ghost, brings home the human cost of walls.

Now, I understand that it might not be the purview of the Canadian Photography Institute to put politics in front of, or beside, aesthetics (not that those two things are mutually exclusive). I also know it’s kind of bogus to point out a perceived shortcoming of something when what you see as a shortcoming was never really the intention of the project.

And, to be clear: the images in Frontera are all well realized, and, with a couple of exceptions, interesting and worthwhile, some are even important. Go have a look and you’ll see.

But in this day and age, to mount an exhibition about the border between the USA and Mexico (or any border, for that matter) and not include more than a token amount of human-scale politics is a curious curatorial choice. The almost complete absence in Frontera of the struggle and strife that these days defines borders is striking.

Couple of weeks ago I mentioned that I’m not ready to look at the pile of images so far shot for my new project. Still true, but I’m thinking about it.

Thought I might mention here the process that has led to that folder of images on my hard drive . . .

Here are three of the 313. One from the very beginning, one from the middle, one from last week. I’m interested to see where it goes. I want to find out what it becomes.